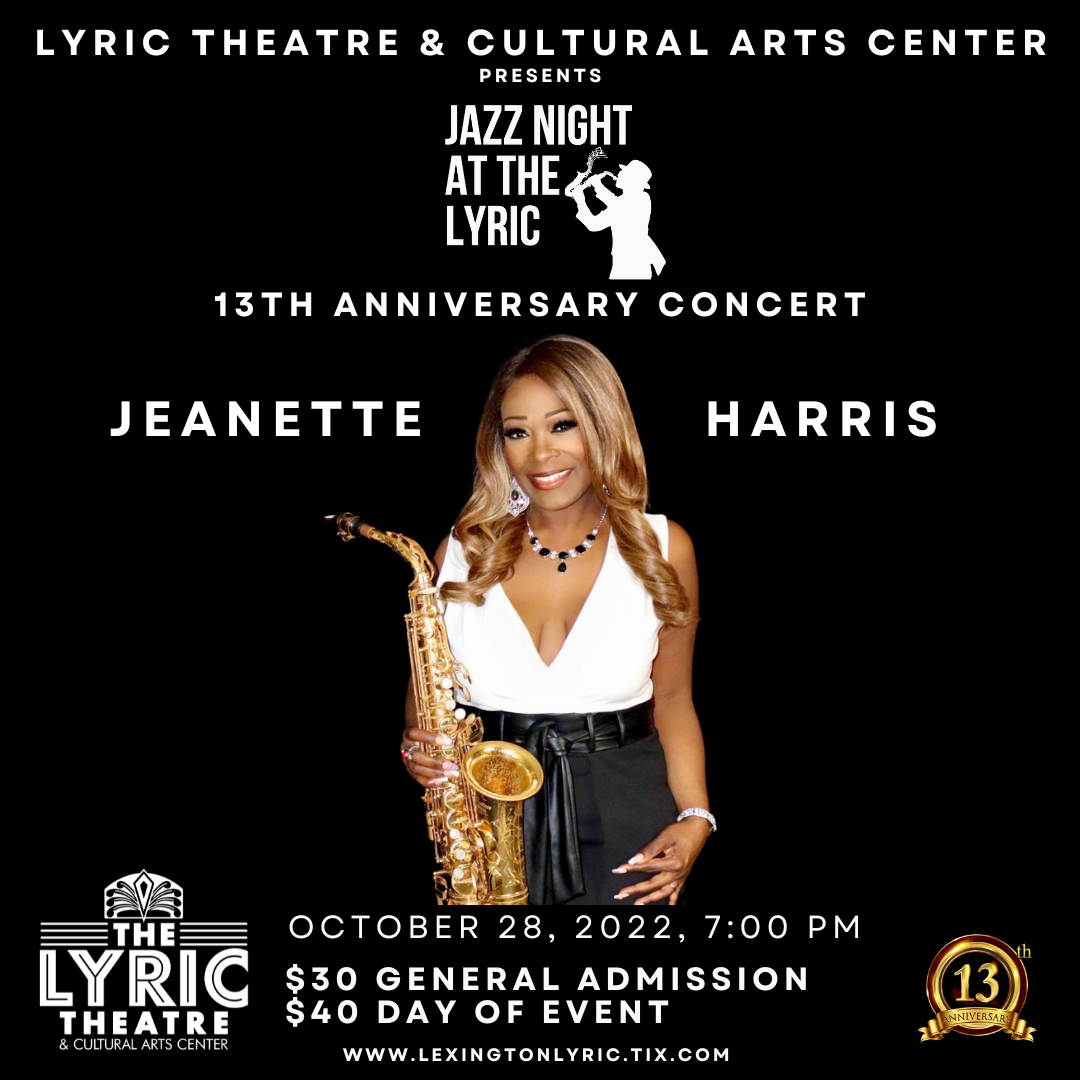 Join us for Jazz Night at The Lyric as the scintillating saxtress Jeanette Harris kicks off our anniversary weekend on Friday October 28th at 7:00 PM!

Jeanette Harris was born and raised in California’s post-Gold Rush town of Fresno in the center of the San Joaquin Valley. Jeanette played saxophone and piano from grade school to high school where band teacher Steve Alcala also had her play in the Fresno City College jazz band even before she graduated high school. She won numerous awards and accolades, which led to a scholarship to attend Berklee in Boston where she earned a Bachelor of Arts degree in Music Performance. Back in Fresno, Jeanette recorded her first self-released CD, Here and There, grabbing brother Michael to play drums with Patrick Olvera on bass, and began building a following by regularly packing Mike’s Pub & Pizzeria. She recorded her official debut album Reflections followed by Smooth Holiday Greetings on her family’s J&M Records.

Citing her influences, Jeanette continues, “Richard Elliot brought some serious R&B groove at a time when smooth jazz really needed more of that funk vibe, especially his song ‘Corner Pocket.’ I just loved his production! As a composer, Stevie Wonder’s music touches the hearts of people with lyrics that have strong meanings, and beautiful chords and melodies. And (guitarist) Norman Brown is the one that inspired me to want to be a performer when my parents took me to see him for my very first concert at The Bastille in Hanford, CA. He gave me chills!” After crossing paths with Brown on the road, Jeanette co-wrote a song with him that became the title track of her fourth CD, Saxified. Brown recorded the song on his Grammy nominated CD, 24/7, with a different title, “The Best is Yet to Come” featuring Gerald Albright. Jeanette has played major events from The Coombs River Bend Ranch Festival to festivals in Japan and London.  She has performed as a side musician with Howard Hewett and Deniece Williams and has opened shows for greats ranging from smooth jazz stars Kirk Whalum, Najee and The Rippingtons to R&B stars Babyface, Phil Perry and KEM.