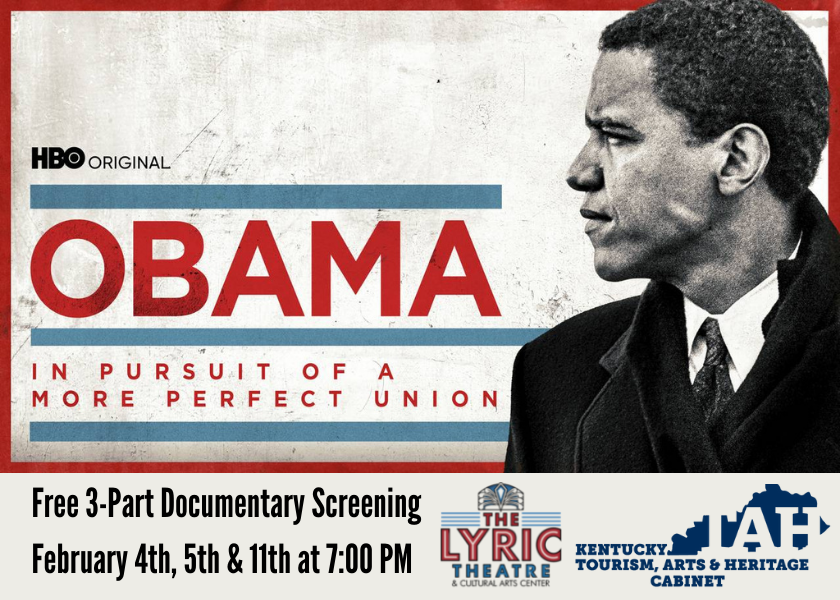 Obama: In Pursuit Of A More Perfect Union

Directed by Emmy-winner Peter Kunhardt, Obama: In Pursuit of a More Perfect Union is a three-part documentary series chronicling the personal and political journey of President Barack Obama as the country grapples with its racial history. The Lyric Theatre & Cultural Arts Center will present three free screenings of each part on February 4th, 5th, and 11th at 7:00 PM as part of its Black History Month programming.

Weaving together conversations with colleagues, friends, and critics, and interspersed with his own speeches and news interviews, the series begins with Obama’s childhood and takes us through his perspective as the son of a white mother from Kansas and an African father, his spiritual formation informed by a generation of Black leaders, and his hopes for a more inclusive America.

The documentary series forms a cohesive picture of America under its first Black president. Through today’s lens, the series reflects on the Obama administration with a new understanding of the personal obstacles he faced and the challenging pursuit for equality in America. Offering a behind-the-scenes look at President Barack Obama, the documentary series premiered on HBO Max on August 4, 2021, coinciding with the former President’s 60th birthday. A short discussion forum will follow each film.

Supplemental lesson plans will be available upon request. The lessons, easily adapted for out-of-school workshops, such as youth empowerment and leadership development, support the integration of the three-part documentary into high school and university classrooms, and The Lyric Theatre will also curate lessons and activities for younger middle school and elementary school scholars. They will offer educators an engaging and relevant resource for students taking or interested in African American History, English Language Arts/Rhetoric, Government, Civics, U.S. History courses, and engaging activities. Throughout the February Black History Month celebration, students will have an opportunity to submit their creative activities and assignments from the lesson plans, and several will be chosen and shared on The Lyric Theatre social media channels and website. For educational lesson plan requests and information about student project submissions, please contact marketing@lexingtonlyric.com.

Properly worn face coverings and social distancing are required upon entry and for the duration in the building. Failure to comply will result in removal from the Theatre.