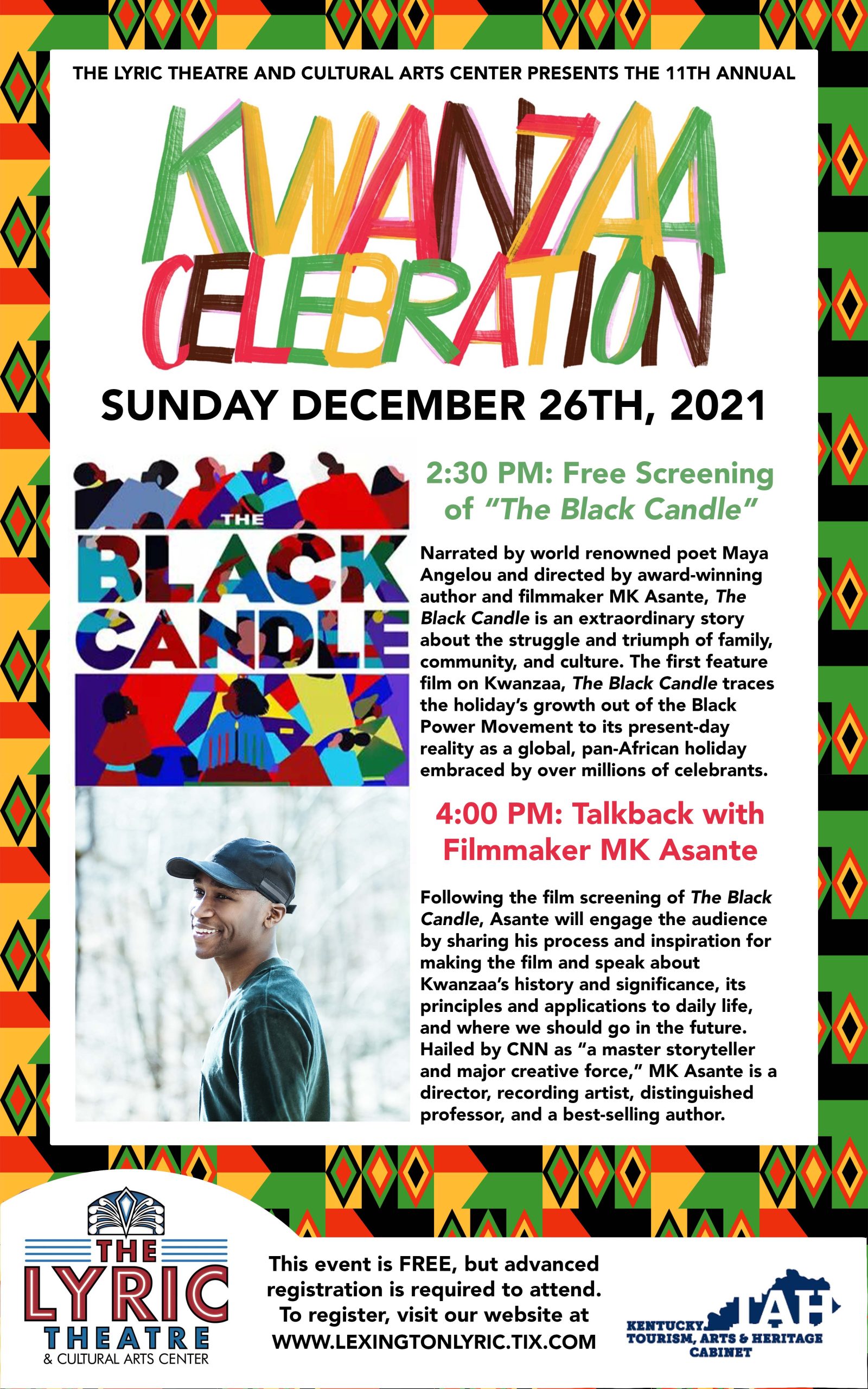 MK Asante is the Producer and Director of the first feature film on Kwanzaa, The Black Candle, narrated by world-renowned poet Maya Angelou. The Black Candle, shown annually as part of The Lyric Theatre’s annual Kwanzaa celebration, is an extraordinary inspirational story about the struggle and triumph of family, community, and culture.

Following a screening of the film The Black Candle, MK Asante will engage the audience by sharing his process and inspiration for making his film, The Black Candle and speak about Kwanzaa, the history and significance, its principles and applications to daily life, and where we should go in the future. This is an educational event of a lifetime not to be missed. The event is FREE, ticket reservations must be made in advance in order to attend.

MK Asante is the author of four books including Buck: A Memoir, which was praised by Maya Angelou as “A story of surviving and thriving with passion, compassion, wit, and style.” Buck is a national bestseller and the recipient of numerous literary awards. Buck is currently being adapted into a major motion picture. MK Asante studied at SOAS University of London, earned a B.A. from Lafayette College, and an M.F.A. from the UCLA School of Theater, Film, and Television. He is the founder of Wonderful Sound Studios, an entertainment company whose most recent work includes the intros for Monday Night Football on ESPN and the Dew Tour Olympic qualifier on NBC. MK Asante co-wrote the 2021 NBA Finals broadcast opens on ABC directed by Academy Award-winning director Spike Lee. Asante has lectured at Harvard, Yale, Stanford, as well as hundreds of other universities. He has toured in over 50 countries and was awarded the Key to the City of Dallas, Texas. He is featured in A Changing America, a permanent video exhibit at the Smithsonian National Museum of African American History and Culture. Asante has been featured on NBC’s Today Show and The Breakfast Club. Hailed by CNN as “a master storyteller and major creative force”, he has published essays in the New York Times and USA Today. His inspirational story “The Blank Page” is featured in the #1 New York Times best-seller, Chicken Soup for the Soul. MK Asante is the Executive Producer and Host of the Snapchat original shows While Black with MK Asante and Free Tuition with MK Asante. While Black is a Critics’ Choice Real TV nominee and has 17 million viewers. Asante was a Distinguished Professor-in-Residence at the MICA Business School in India and is an Associate Professor in the Department of English/SWAN at Morgan State University.